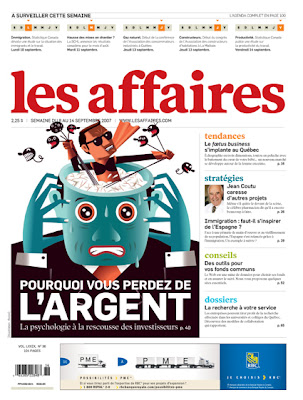 Les affaires, the Quebecois business newspaper, has been honored by the Society for News Design in the 2008 competition. It received an "Award of excellence" in the category : "Redesign". Congratulations to all of Stephane Lavallée's team that has been working hard on this relaunch.

Mignon-Media has been helping les affaires team, in 2007, to rethink the vision, the editorial strategy and the design of the newspaper with one main goal in mind : increase analysis and prospective content.

Since the relaunch, newsstand sales have been up 10%. Advertsing sales have surpassed objectives.

Mignon-Media has also been part of the rethinking of lesaffaires.com, the weekly's website. Since then, the site is breaking all of its records with regards to unique visitors, page views and time spent on the site by users. In November 2007, its stats were higher than those of its main competitor.

It is always an honor to receive an international award from the SND. An award that recognizes an "editorial redesign" and not a "decoration redesign".

We are very happy to add this award to others that we have won in the past.
Posted by Jeff Mignon at 9:44 AM
Email ThisBlogThis!Share to TwitterShare to FacebookShare to Pinterest