"When Frenchie met Nancy, Beauty and the Beast revisited" 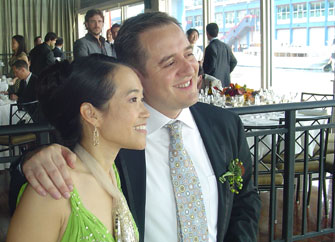 "When Frenchie met Nancy, Beauty and the Beast revisited Everything you have always wanted to know about sex... is Mission impossible ! Some like it hot but Witness never got the Licence to kill and to tell you All about Eve and her Top Gun, even in our Modern Times. Meet the parents or be Usual suspects. I now require the Silence of the Lambs to tell you Dirty Pretty things in Once upon a time in America. She is not an African Queen but he is not the Treasure of the Sierra Madre. She is not really the Lady from Shanghai rather an American Beauty and he is not an American in Paris rather the French connection. She is not a Cold Mountain but he is not an English patient rather a French impatient and maybe a Talented Mr Replay who learnt How to marry a millionaire. Vertigo in Chinatown. The not Brief encounter of the no Ordinary people happened in Manhattan at The Firm. Jef was sent to this Risky business or Road to perdition by The Good, the Bad and the Ugly. She was recruited by the Godfather (with no part 2) at Scholastic. He was a Local hero, she was the Graduate. He was not Notorious, speaking English like the Pink Panther, he was the Rock but also Psycho, always in black like the Men…so at first, she thought he doesn't look like a Deer Hunter, so All is quiet on the Western front. But soon : the Manchurian candidate becomes Black Hawk down with the China syndrome. From New York New York to Sin city. Jef was inspired by the Roman holiday and the Italian job of Best Friend with no wedding, the Client of BrainQuest, the Quiz show. Just before Apocalypse Now. Love actually. Not Babette's feast on the Waterfront, rather Murder on the Orient Express but no Crying game with the Karate kid at the Independence Day. At work to the Working girl he said Stand by me. Jef had a Sixth sense to cope with the Six degrees of separation and What women want, even Women on the verge of a nervous breakdown. In fact, the Quiet man soon to be a Quiet American is a Raging bull, the Great dictator Master and Commander at work, a Man who (thinks) he knew too much, a man who knows what it is To Have and have not, soon to be a Million dollar baby with a Fistful of dollars, a Citizen Kane. So far, only super Size me. Jef, Do the Right thing ! Because You only live twice."

Posted by Jeff Mignon at 3:36 PM
Email ThisBlogThis!Share to TwitterShare to FacebookShare to Pinterest